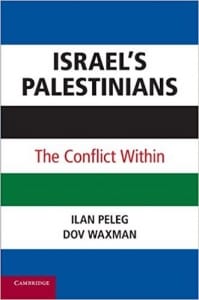 The Conflict Within
by Ilan Peleg and Dov Waxman

Arguing that a comprehensive and lasting solution to the Israeli-Palestinian conflict depends on a resolution of the Jewish-Palestinian conflict within Israel as much as it does on resolving the conflict between Israel and Palestinians in the Occupied Territories, this timely book explores the causes and consequences of the growing conflict between Israel’s Jewish majority and its Palestinian-Arab minority. It warns that if Jewish-Arab relations in Israel continue to deteriorate, this will pose a serious threat to the stability of Israel, to the quality of Israeli democracy, and to the potential for peace in the Middle East. The book examines the views and attitudes of both the Palestinian minority and the Jewish majority, as well as the Israeli state’s historic approach to its Arab citizens. Drawing upon the experience of other states with national minorities, the authors put forward specific proposals for safeguarding and enhancing the rights of the Palestinian minority while maintaining the country’s Jewish identity.

This book is the most authoritative study to date on the increasingly crucial question of Israel’s Arab minority. The work represents a focused analysis of recent political and socio-economic changes, supported by a wealth of documentary evidence. It will undoubtedly serve all scholars and students seeking deeper insight into this timely topic.

This is a superb overview of an understudied dilemma. Even those familiar with the issues will learn much that is new from this thorough and dispassionate analysis. Peleg and Waxman look at both the Palestinian and Israeli Jewish sides of the question fairly and impartially. The comparative dimension is also a great strength, adding needed depth and perspective. For both scholars and general readers looking for an up-to-date, reliable guide to the current situation of Palestinians in Israel, this is the book of choice.

– ALAN DOWTY
UNIVERSITY OF NOTRE DAME, AND FORMER PRESIDENT OF THE ASSOCIATION FOR ISRAEL STUDIES